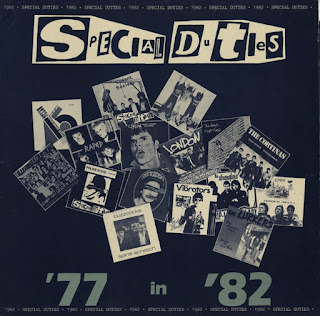 Special Duties- ’77 in ’82 LP review
Underrated, supercharged Oi! with a faster beat and a bleaker outlook- this is the epitome of what UK 82 was, and although these guys weren’t as well-known as the likes of their contemporaries like the Exploited, One Way System, Abrasive Wheels, and any band on a punk’s denim/leather jacket circa 2006 (that they probably didn’t listen to), these guys were just as good, if not better.  The rhythm is much heavier than the melody here- it’s downright thudding, stifling even, and not in a bad way.  The simplicity and brutality of these songs is what sets them apart from their predecessors.  Neither an evolution nor devolution, it was a progression that left a permanent imprint on the world.  This is what the “hardcore” movement in the UK was, the one that sprouted up alongside Black Flag, Minor Threat, Bad Brains, Negative Approach, etc.  Since the cultures were different, they progressed and manifested differently as well.  The songs and demeanor were different, but there still existed a camaraderie of sorts.  Those who make the effort to research history will be the ones who unearth lost treasures.  This is no doubt one of those.