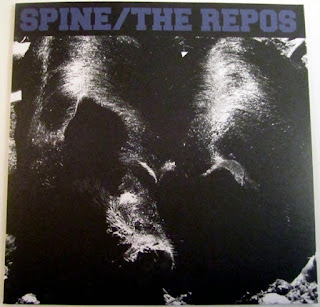 Spine/Repos split 7” review
The same sides of a different coin, these tracks, this split, fucking rip.
On Spine’s side, there is more of a sociopathic late-80s NYHC feel to it (not New Breed Comp. style, though- more like the bands on The Way It Is).  The lyrical content is on point; one song is about a dystopian future complete with cannibalism, another about the problem of sexual assault at shows, one about the future already being written for you, and the fourth is about problems with dentists.  The final song is a cover of the Repos’ Kids Don’t Care (off their first 12”); these tracks are a simultaneous continuation and evolution of the songs laid down on their first EP.
On the Repos’ side, it’s clear the band has changed since their first incarnation (they broke up in 2008, members went on to form the Ropes a couple years later, and due to threats of litigation by a more commercially successful band also named the Ropes, that band folded, and thus the Repos were reborn).  The jagged, disjointed, angry, and puzzled sound still remains, however, and the charm of the first band also still exists.  Blurry in its blending/mixing of the instruments, the sound is one ugly mix of killer hardcore punk with rough enunciations of something resembling words.
The packaging is excellent, everything a split should be.  Same goes for the sounds- this record has reinvigorated my belief in the power of the split(s).